Recently we have reached a new mile stone of which we are proud to share with you. During 2016 we received an order for World's largest Forged Wide Body Shackles rated with a stunning Working Load Limit of 2500 metric ton.

Specifically for this order further development of our production machines and a new build testing bench (with a capacity of 6000 metric ton) were required.

At the beginning of December we finished the production of the shackles, we executed load tests at 32619 kN and examined Non-Destructive Testing post load. Last but not least these have been shipped directly to our Singapore based client, Franklin Offshore. (World wide also known as manufacturer of the world's largest cable laid manufacturer) 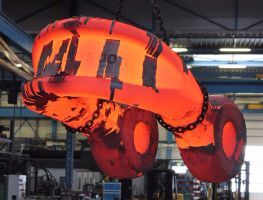 These shackles are meant to be used on a new heavy-Lift sheerleg of Asian Lift. This self-propelled floating sheerlegs can perfom single lifts of up to 5000 metric tonnes and carry out tandem lifts exceeding 5000 metric tonnes with multiple cranes.